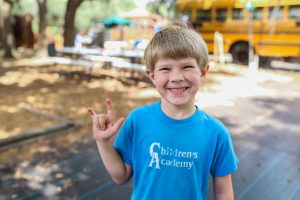 Congratulations, you have decided to give your child the gift of languages with a Language Immersion Preschool. One day your child will thank you for it.

We know you are invested in the process of your child becoming bilingual. We are thankful you have chosen in this investment and we are going to share more about why language immersion preschool programs will benefit your child now and later in their life.

Let’s start with the WHAT! What exactly is a preschool language immersion program and how are they different from traditional language classes. A traditional class means that one class is taught in the foreign language (Spanish). The other classes in the child’s preschool are taught in English. What we find is a relatively only a small perfect of the child’s day is has been spent speaking Spanish.

In a language immersion preschool, most or all classes are taught in the foreign language, resulting in a high percentage of the day speaking the language. There are different type of immersion programs. However, most programs assume that one language is being spoken at home and you, the parents, would like another language to be learned at preschool and for some immersion programs a third language will be picked up in later in the program.

Complete Immersion is probably the most popular choice and means that 100% of the classes are taught in Spanish. This type of program is designed to bring about fluency in the Spanish language. Your child will become fluent in English, because this language is spoken at home. This type of immersion is considered to be one way.

Partial Immersion means that 50% of the classes are taught in Spanish. With these type of programs the goal is for the school to focus on fluency in both English and Spanish, they are considered two way. Some schools support a triple play program and these are for the very ambitious and will involve a two-way complete immersion with Spanish and Mandarin at school with the assumption that English is spoken at home. These types of programs are rare.

1. A True Investment That Will Save you Down The Road:  Studies have shows that children have a window of a few years during which learning a second language comes easily to them. Very easy in fact. The estimated “cut off” age is around 10 years old. An immersion preschool may be a little more expensive than an “English only’ one, but the return on your investment on their language education when they are less than five years old is, let’s say a hundred times greater, than when they are older and in their teens and we will say a thousand times greater by the time they are in their twenties, especially when considering the cost of college these days.

2. Language Absorption: Children are little sponges from about the age of 6 months and through the age of 10. Studies show the more you give them to learn, the more they will acquire. If you want them to learn more, it makes sense to give them the opportunity to learn a second language while they are still in this “sponge” period. The frequent use of the foreign language being used in immersion programs in much higher than in a traditional class and this increases their opportunity to absorb the language.

3. Teaching Approach:  In a preschool whose main focus is teaching a new language, the teachers have more time and flexibility to approach teaching for a wider variety of angles.  This style is a good fit for our younger learners who are naturally inquisitive and are actually able to absorb the languages from all angels.

4. Involved and Invested: At the organizational level, language immersion preschools tend to act as a magnet for achievement-oriented parents who like to stay involved so you can meet others share your education values. Many parents will invest time into ensuring their child knows how to communicate everything in English and Spanish. An example may be when a parent says “You know rojo means red, correct”

5. Diversity, Culture, Compassion:  You are creating an environment for your child where they need to try harder to understand and to be understood. This is a very meaningful way to teach compassion. It is also impossible to learn a foreign language without understating the culture that goes with that specific language. Becoming culturally aware and compassionate for others with different backgrounds have always been an asset. In today interconnect world, we believe this connection and compassion is priceless!